After a sudden onset illness and two days of rapid decline, our Charlie passed away in my arms early this morning. 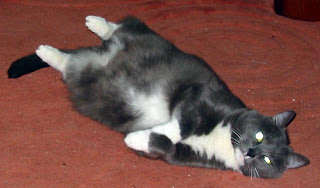 We aren't sure of the cause; but we did our best nursing her and keeping her as comfortable as possible. Ultra-low temperatures precluded us from making the 4 hour trip into Fairbanks to get her to the vet despite our continued efforts to get the truck running and on the road. 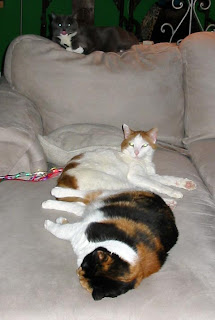 We adopted Charlie in 2007 from our vet while Odin was hospitalized the first time after being diagnosed with diabetes and chronic renal insufficiency. She had been abandoned by her previous owner and had been living in the vet's kennel for nearly a year at that point, so we have never been sure exactly how old she was.

Despite general crankiness, Charlie was a loving and adorable kitty. She was with us and provided comfort throughout Odin's illness and eventual death in 2008, and the death of his sister Celine in 2009 of massive stroke shortly after we arrived here. She valiantly survived a drive through Canada, two winters in wall tent and Ripley's puppyhood.

Charlie will be sorely missed, everyday, as I miss Odin and Celine.
Posted by Plickety Cat at 1:44 PM

I am so sorry to hear of Charlie's death. Losing a loved pet can really be hard.

I still remember what you had to do in order to ease Celine's passage. I hurt for you -- and I'm sorry.

As an avid adorer of cats and currently owned by a Snowshoe, it broke my heart to read of the loss of your beloved Charlie. It always pains me to know that we have to suffer such emotional hurt when we lose those precious creatures that bring us such joy in their relatively short lives. I weep for your loss. :(

I am so sorry for your loss and glad that Charlie found a home with you guys. Living with these fine companions is one of life's great joys and sorrows. Jennifer in western NC

I'm sorry to hear about Charlie. We lost our Golden earlier this month due to Rocky Mountain Spotted Fever. It's hard to lose them after fighting so hard to save them.

Will also worry about you or Gungnir not making it to a hospital in time, if that unfortunately comes about. The super cold you are getting this winter is a trial for sure and a testament to you both.

I follow your blog. I'm so sorry to hear about Charlie. I know what it's like to lose a beloved pet and I hurt for you. I too will also worry about you or Gungnir not making it to a hospital in time if something happens to either one of you.

I'm glad to see you all back on line...hoping for more posts and pictures still...

Sorry for the loss of Charlie. It's so sad but she had a great life with you both. Both of you enriched her life as much as she enriched yours.

Sorry to hear about your cat. I know how hard it can be to lose a member of the family.

Sorry to hear about Charlie.

Condolences to you both (and Ripley). I don't comment much here but rest assured that I check in on you guys regularly. I am in ongoing and total awe of your epic saga.

I am so sorry to hear about your beloved Charlie.