I guess summer must have decided to go for broke and get itself all in during July & August's heatwave. It's been cold and rainy for the last week or so, the trees are all turning and the fireweed has blown its top. We didn't really even get a normal temp sunny day without mosquitoes this year.  [[[SIGH]]] 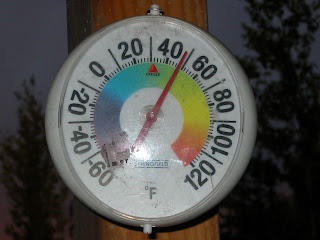 We did an up-and-back supply trip into Fairbanks today despite the rain. First bit of nightmarish Hell was on our gravel portion of the Elliott where DoT has taken it upon itself to "improve" a 25 mile section of the road. I don't know what they were planning to do or why, but what they've managed to accomplish is a quagmire of hazardous mud right in one of the steepest, bendiest parts.

The second bit of nightmarish Hell was on the paved portion just outside of Fairbanks. They blocked the entire right lanes of traffic in both directions AND hung everyone up with a pilot car... just so they could sweep the shoulders.  I mean, REALLY!?!?! Closing lanes for several miles in both directions when the sweeper is only running on one side is just retarded. Why even close the lane!?! The sweeper barely edges over the line! And why, why, why have a pilot car directing a huge line of traffic in one direction at a time when both left lanes are still completely open and viable?!?

OK, I must admit, this one is really chapping my ass... so prepare for a rant.

There are turnouts (scenic overlook and mountain chain-up areas) all along the gravel portion of the Elliott Highway, and most of them are at the top or bottom of the really steep squirrely parts. Every bleeding fall when moose season opens, we get droves of urban commandos from the city down here tailgate hunting because their Game Management Unit is pretty much hunted out for moose. Anyway, these nimrods in their multi-$K sport-trucks & RVs with their toy haulers set up tent villages (complete with campfires and kegs) in EVERY  SINGLE turn out and park RIGHT IN THE ROAD to glass for moose.

Seriously?!?  It's dense boreal forest, people, what the hell do you think you're going to see from the road? I can't even see a moose in the trees on my own damed property less 100 ft away. And do you really think you're going to get through the trees on your decked out ATVs? Sorry to say, but you're going to have to hike your ass in there, and you should be humping your tent and gear out there as well instead of blocking the road and being a nuisance! And you certainly better not expect me to stop or wait for you to get your shit out of the road and your act together... I live here and I've got shit to do, I'm not on the road for fantastical funsies.  (And, YES, my husband did flip you the bird when you were waving us to slow down so you could back your trailer that's bigger than our cabin into that emergency turn out... he called you a lot of interesting epithets as he drove by without slowing down, too... deal with it)

Oh yeah, and BTW, half you fidjits are glassing in the wrong direction -- there's no general moose hunt on tribal land south of the road! ADF&G publishes a comprehensive book of regs with maps and everything -- so why don't you RTFM and learn some nav skills!?

So, hey better yet, why don't you take your digital camo & misc. hunter-porn crap and go hunt caribou from the Forty-Mile herd back in your own damned GMU, and let us have our moose because we actually hunt to survive out here!  If you wanted to park your vehicle in the turn out so it was safe while you hike out for a proper hunt, that's one thing... but this Hunter-palooza crap is an insult.

There has been a crazy amount of bears this year, blacks and grizz, and the salmon are running &  blueberries are popping nice and sweet right now. Not saying I truly wish anyone ill, but it would be poetic if one of these set-ups gets a close encounter!

ETA: P.S.  Ripley and Jackson are getting along much better, although there is still some sibling rivalry... and all food is apparently Jax's now LOL.  We also stocked up on soil & amendments on this trip during the end-of-season sales (had to fight somenoe for the last bale of peat moss -- I'm a scrapper when I need to be!), so we should be able to get at least some of our garden started next spring.
Posted by Plickety Cat at 9:45 PM

LOL, give um hell. I know just how you feel.

Being illegal to hunt from the road, fish and game could help bring a clearing to that mess. Ya some of the want to be, out doors men get all the gear then drive around to show it off vs doing anything with it...there is a lot of that in this area. It is funny really.

Loved your rant about the hunters! Some people have no common sense! Give 'em hell!

Hello
I just want to know that you are OK
Please!

This rant so cracked me up! I live in South Dakota and when the buffalo get anywhere near the road people go nuts! People just stop in the middle of the road, and then get this! get out of the car and try and either pet it or get a photo! People what are you thinking! They might look cuddly and passive just out grazing, soaking up the sun but they are not. I wish I knew what the buffalo were thinking. Sometimes I think this is where the Far Side comics started. Ok Bob, let that one get just close enough. Ill circle left,you take the right!