It was almost above freezing today, so after we did our daily deadite patrol we decided to go on a little scouting foray around the property. 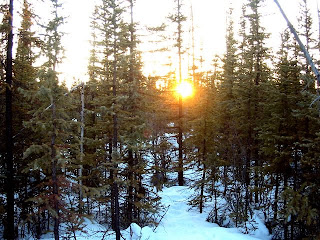 Even with the GPS, hiking through the snowy woods was a bit of a challenge. It's amazing what a couple of feet of snow and bizarre sun angle can do for your sense of direction. It totally changes the landscape and makes you lose track of where you were when you saw something before, and some pathways are no longer obvious or navigable. Luckily I'd marker painted/taped a few trees this summer or we never would have found some of the things we wanted to check on (we remembered to add marker points on the GPS this time!). Of course, I did paint some of the path arrows on the ground like an idiot, those were totally useless buried under the snow.. DOH!

But we did manage to find our center marker again without getting too lost, and two of the major landmarks we wanted to check on. 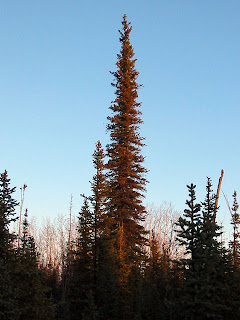 The first one is what we call the "Sentinel Tree", it was pretty easy to find this one once we got close enough to see through the other trees. I'd estimate this baby is about 150' tall, and I can just barely wrap my arms around the trunk. It's the tallest & biggest (living) tree in this section and has a commanding view of the acres around it. One day, when I'm feeling frisky (and G-man isn't there to stop me with his safety concerns), I'll have to scamper up there to see what I can see.
There's a reasonable clearing of sorts right here, and the few larger trees we'd have to clear are the right size and straightness to make building logs for the main house. So, we might consider putting the Shanty here and spreading out the rest of the homestead from this point. It is a little closer to the northern and western boundaries than ideal; but we'd have plenty of room to expand to the south and east, which would keep any buildings from blocking the sunlight on the pastures/fields/garden.. 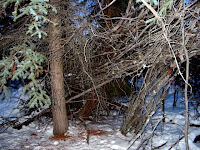 But we somehow managed to lose the "Secret Garden" for a while and had to backtrack our trail a few times. It's a circular clearing right in the middle of some really big trees, with a large clearing of sorts just on the other side of them.  We were hoping that there was a spring here since it was really lush and almost boggy in the summer, but we couldn't see any surface water, ice or melted areas. One might still be a spring there, making it a little warmer, as the snow isn't as thick there. There has to be some reason such a large stand of trees popped up right in the middle a huge chunk of baby trees. At the very least, it does indicate that there isn't much/any permafrost right here... so we might be able to sink our pier footings if necessary. We'll have to come back and check it again after Breakup; maybe do some probing to see if test holes fill up with water. It would be excellent if we could drive a shallow well right here since it's located a convenient distance from our center marker which is pretty much a huge clearing just begging for pastures and buildings. 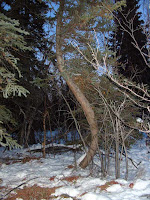 I also wouldn't feel too bad about cutting down some of the larger trees around the "Secret Garden" since they're weather bent.  Yeah, this is not an example of a prime building log! Although it could make a pretty neat set of (non-load bearing) porch posts and railings. I feel bad about cutting down larger trees that aren't large enough to use as house logs since it takes forever for trees to get big here; but these bent trees are going to break or fall down on their own soon enough, so cutting them down and making firewood or something decorative out of them doesn't bother me as much. I'm sure plenty of folks think I'm crazy (or a bleeding heart tree-hugger) for taking the extra effort and time to bend my driveway around or move where the house might be located just so I don't have to cut down a nice tree... but, hey, with 80 acres I'm positive that I can find a building site that doesn't require me to needlessly murder too many perfectly good trees just because they're "in my way" :D 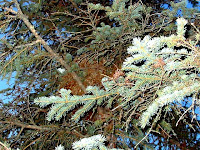 Both these locations seem to be reasonably sound, and are apparently well-sheltered during the winter if the number of squirrel's nests we found are any indication. The number of squirrels nests, hare trails, and porcupine tracks we found also mean that the soil in this area might be decent enough to grow the garden in, or at least the pastures, since there is all sorts of munchy debris at the base of all the trees. Gotta figure that if the wildlife think a place is a good home, with good food and good shelter, it might just be a good place for your home, too. 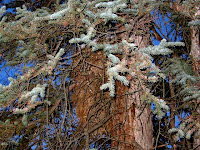 Of course, that means you might have to contend with your place being overrun with squirrels... and we all know they're annoying and theiving little bastards! Porcupines and a big hyper dog with a high prey drive might be a bad combo though! Ripley is pretty good at keeping the hares at bay so far, so hopefully they wouldn't survive scavenging in the garden too well (but that's what electric polywire is for anyway!). At least we didn't see too many large animal tracks at either of these locations, so it looks like they aren't on any major migration or foraging paths... good to know!

If the weather holds out, we'll probably venture to the east or south sections that we really haven't explored much yet. Who knows?! We might find the ultra-perfect site right around the corner :)
Posted by Plickety Cat at 7:24 PM

Looks beautiful out there. Glad you guys finally got some decent weather to venture out in.

Glad to hear the weather is starting to cooperate. Hopefully, you will be able to get started on a more stable residence soon.