It's the end of the first week, and all I have to say is I thought I was reasonably fit, not marathon runner fit, but generally fit, you know run the lawnmower around the yard, maybe go on a five mile hike, move house in one day type fit. Man oh man, that is way not fit enough for the stuff we've been doing this week. Cutting trail, in the Alaska bush, easy you'd think, get a couple of chainsaws, get cracking, except for the undergrowth and brush that builds up in the lower layers that needs clearing too, oh and the fire dead fall from back in 2000 or so.

So here are some pics for your deliction 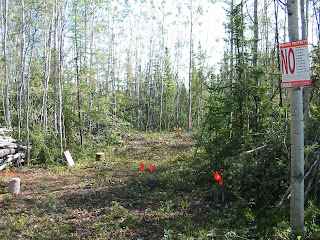 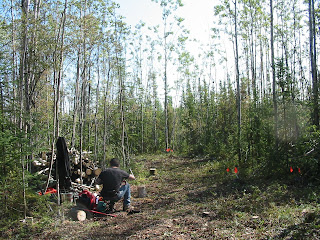 Ok so at a guess that's about 40-50 yards, which seems not too far (maybe I'm being a little hard on us). Once we break through those tree's at the end you can see (about 10 more yards) there's a nice clearing where we can put up that Big Ol' wall tent, which should make things considerably easier.

Anyway from an issue stand point here's how you clear trail.
Get the Brush out of the way (otherwise you can fall over with the Chainsaw and that isn't the best idea). It also lets you just cut the tree's you need the Chainsaw for, which uses less gas, and fewer chains.

Look at the tree to see where it's likely to fall, and notch it, then cut in from the opposite direction and hopefully it falls where you want it to.

Then drag it and cut it up into shorter lengths for that pile you see to my left in the picture above. This isn't always easy, since it's tangled in other tree's in crap on the ground, you, your spouse, etc. etc.

Joy's of lumberjacking. Oh and then there is the Smoke from the Minto Flats fires, and the skeeters, deer and horse flies, no-see-ums and midges. Which surround you as soon as you stop doing anything and are attracted by heat and carbon dioxide, everything a growing and working boy creates.

Speaking of smoke here's another picture of the Sun through the Smoke from Manley on Wednesday. 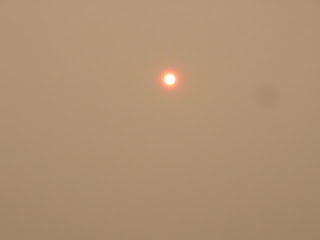 This was noon...
I hurt a lot mainly in every major muscle group. The Hot Springs Baths are great though and help ease out some of the muscle soreness. While playing with power tools is on my list of great things to do, having to do this full time is pretty hard going, making sure I keep up my calories and hydration levels is hard too, because by the time that you feel the need you're already behind your hydration or nutrition curves. It also doesn't help that my wife has differing work style, hydration and nutrition needs, so it's not like she's feeling a bit dry and we can stop and drink. So pay attention and eat about every hour, just something that's smallish and high energy or high protein either works well, and get in about a half pint of water and you do fine.
Posted by Gungnir at 6:38 PM

...or wear a Camelbak and just sip more or less incessantly. I go through about a 1/2-3/4 liter of water an hour just talking (when I teach Pilates)....FWIW.

Egad. Hope that fire stops soon, and the air clears...

We have our Camelbacks with us... unfortunately, having 3 liters of water sloshing around on your back is not particularly conducive to wading through brush and thickets. Trust me, you don't know life until you get strangled by your bite tube that's hung up on an alder LOL :)

Ah. As usual, you two are about 3 steps ahead of me.