At the Half-Way Point

Just came in from clearing out the trail (some) so we can keep cutting further. Much to our surprise, we are further in than we thought we were, as we discovered that we were actually parallel to the "Secret Garden" and not too far off from the "Sentinel" Tree. Woohoo!

Here's a little illustration so you can see the layout: 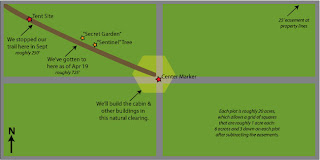 We have a cord (+/-) of firewood from last fall's clearing, which we finally got around to bucking up into stove lengths because it got buried under the snow before we could get to it. We now have a new mound of logs to buck up from the spring clearing so far, which will probably be another 1.5-2 cords.  That's not including the 5+ cords of deadites that we cleared and burned this winter.  Figure by the time we're done cutting in the trail and clearing the building site, we should have at least 6 cords of green to season, plus another 3 or 4 cords of deadites for immediate consumption. We're basically salvaging anything that's bigger than my fingers fit around... it all burns!!  Actually, we prefer smaller wood to big splits since we have greater control over the temp that way... the big split stuff is normally just for bedtime or long absences.

I'll post pics of the trail (and blooper trail), the massive brushpiles, and all our stacks of firewood and mounds of logs soon. Plus pics of all the puddles and slush everywhere. Forgot to take the camera with me again today :-D

We've also had some moose visitors recently. From the signs we saw today it looks like a female or possibly a younger male... now we know what Ripley's been all woofy about. Wonder if that big bull from last year will come back, he seemed fairly at home last time I saw him. Of course, a mom with baby is probably just as, if not more, dangerous that a big bull, so we'll keep our eyes peeled. Seeing the occassional sign of bears, but not too close to the tent and nothing that indicates that any are hanging around... so far, so good. The rabbits are starting to turn brown again, and the birds are back... so are the flies and mosquitos. Ah, JOY!
Posted by Plickety Cat at 4:52 PM