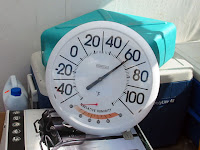 Yes, it really is 60F -- and it feels really hot! Mostly sunny with a light breeze, perfect for clearing trail. Although this says it's 40% Relative Humidity, but that's only because the gauge doesn't go lower; our electronic monitor indicates that it's 27% RH today... so slightly more humid than normal. Most people can't deal when it's this arid, but we seem to do ok now that we're used to it... high humidity has always been a killer for me anyway, I hate feeling sticky. 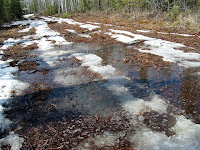 The warm temps and 16+ hours of daylight have resulted in lots of thawing. "Break Up" is officially here, and is turning our driveway and clearing into a slushy bog. Although, since we didn't get as much snow as usual this year, its not too bad. Just means we have to be careful where we walk and deal with Ripley running inside and nailing you with cold soggy paws. Poor girl, even though she's blown her winter coat, with all the snow melting she can barely find a place to cool down anymore. 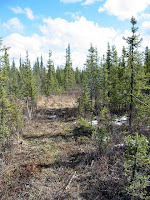 Now that the snow has melted, you can finally see how much farther we've gotten on the trail clearing this spring. It does meander a bit, but mostly because it was hard to figure out where you were and what was underneath you with 2+ feet of snow on the ground.  Standing at the eadge of the clearing where we stopped last September, it actually is starting to look like a proper driveway!  Once we get the Billy Goat brush mower fixed and borrow it back from Jimmy (after doing some clearing for him in exchange), this should clean up quite nicely. It might need to be widened a little bit more to let the truck through, but the ATV goes down it just find... once we take the wiggles out, the truck should fit just fine. 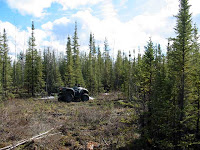 And we have our "Central Processing Area" that's at the head of our current push. This was a somewhat natural clearing full of deadites that we salvaged earlier. Makes it much easier to park and turn the ATV around here for the time being rather than risk it getting trapped in a brush-filled trail with us. We just unhook the sled and take that down the trail for now. This clearing also makes it easier for us to pre-process the firewood trees into manageable logs before sledding them down the trail to house. 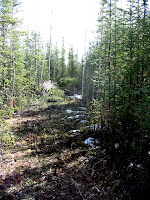 And my little blooper trail is handy for us to start piling up our brush in as we continue to clear further down our corrected heading. Clearing up all the slash, brush and little stuff out from behind you is the most time consuming part of clearing trail. If you're not careful, you can get stuck with a chainsaw that's out of gas with no way to go forward through the dense trees and no way to go backward because you have a 20' brushpile behind you! If you're really lucky, you'll find a thin spot of forest to bull your way through, else it's a very long journey back out getting tripped and whipped the whole way. But you can see how easy it is to lose your bearings in this sort of forest... it all looks the same! 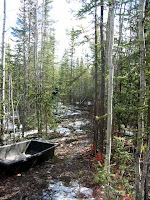 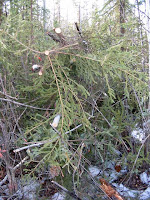 We have brush piles like this one about every 20 yards down the trail. All of this is either wet/punky stuff that wouldn't burn, or spruce slash and other stuff too small to bother making into firewood.  We're probably going to have to move a few of these piles again if we end up widening the trail for the truck since they're kind of crammed to the side. Sometimes the forest is just too dense to clear out the brush as you go. Eventually, I figure we'll have a big bonfire to celebrate reaching the center marker, but theres way more brush than we need for even that :-D  I think we'd burn down the forest if we tried to burn of all these brush piles, so we'll leave the ones that aren't a safety issue (fire or vehicular) as natural habitat for the critters.
Willow thickets, huge fallen trees and massive stumps cause us the most problems. Those damned thickets just will not die and they love to snag you and throw on the ground. Makes for dangerous footing when you're carrying a huge log or a running chainsaw. The stumps and fallen trees are less difficult to clear out or go around as long as the ground isn't frozen... both of these are right in the middle of the trail and we can't deal with them properly until it thaws a bit more, then they'll pull right up with the ATV winch. I'd like to keep that stump mostly intact and just move it elsewhere since it makes a nice hidey-hole for the critters. 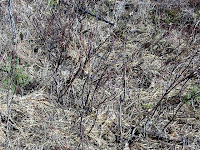 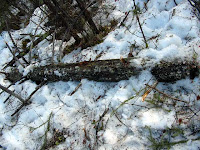 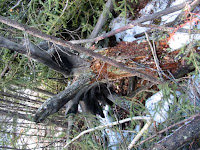 And here we can see the trail heading back to the tent. We're going to have to get a trailer for the ATV soon since I doubt the sled will manage much longer now that the snow is melting. 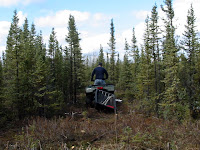 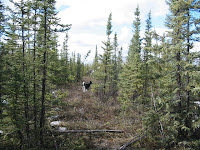 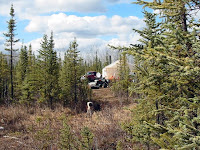 So every day, we end up with a little more of this: 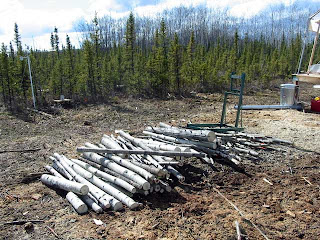 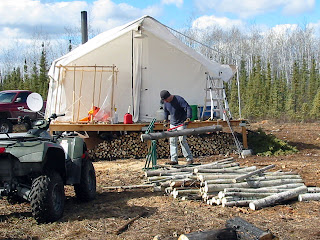 And end up with some more of this: 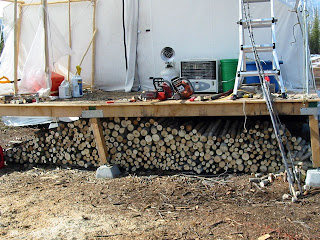 (yes, we're having some heaving issues with that center post now that it's warming up -- we'll fix it as soon as we can get the pier unfrozen)
Posted by Plickety Cat at 5:35 PM

Jennine, it was very nice to talk to you today! Good Luck with your project! Thanks again for your order from www.connectorsonly.com let me know when it arrives!! Mark Kramer