Despite injuries, mechanical gremlins, and evil willow thickets we've managed to come abreast of the Sentinel Tree. Also realized that the Secret Garden and the Sentinel Tree were farther apart from each other than I'd originally illustrated. Oh well, it's all good now. We estimate that the trail is now somewhere between 2/3 & 3/4 of the way to the center marker. 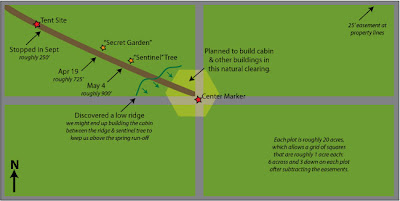 During further explorations, we also found a low ridge just NW of the center marker. There are tons of creeks running through this area, and this ridge was most likely an old bank before the creek either moved or went underground. The ground closer to the marker forms a slight depression and is soggier than the area above the ridge. Since there is a natural clearing of sorts in the middle, I'm guessing that there is probably a good chunk of permafrost or an ice lens that is preventing the spring run-off to completely drain and keeping the larger trees from taking root.

So, it looks like we'll likely end up building the cabin somewhere between the Sentinel Tree and the Ridge, and leaving that acre or so towards the middle open for the raised bed gardens or fall pasture (as it should still be green when everything else is bone dry). There are two silver-linings to this discovery: 1) very likely to be a decent well site near the ridge if the creek just went underground; and 2) we won't have to cut the trail quite as far before we start building :-D.
Posted by Plickety Cat at 4:22 PM