Shortly after posting the "We Have Touchdown" entry, our tent platform completely collapsed!  Yes, folks, we had our own little private earthquake out here in the Bush.  Everyone was fine, and nothing serious was broken, although we did spend quite a few hours picking up shelving units and cans of food, etc.  After careful inspection, and putting things back to right, it appears that only a jar of olives and a few candle holders were sacrificed to Murphy that day!

So here's what happened...  When the Spring thaw started, one of the posts on the back of the deck started to jack and twist. We really didn't think that was particularly concerning since there were several other posts that still seemed to be reasonably plumb. In fact, we were planning to jack up the deck and fix the twisty post the day following, now that we'd finally finished clearing the darned trail. But Murphy was afoot again, and beat us to the punch line.  It just HAD to be a really hot couple of days before we could get to the releveling, and that melting completely destabilized a few of the other piers & posts, soooooo.....

Anyway, we're just standing around, making dinner after a grueling 3-day push to finish the trail when everything sort of slid to the southeast and then *thump* *crash* *boom*!!!

We spent the rest of the night surveying the damage and cleaning up the mess inside. The entire following day was spent rescuing a few items that I'd crammed under the deck the day before (figures!), cutting out the kicked out posts and releveling the deck directly onto the concrete piers with the hand jack for our pickup in about 6 inches of squishy, spongy, meltwater-laden tundra moss goop . Then the following day was consumed trying to get the satellite dish realigned, and enough trees cleared, to get a strong enough signal now that we're 3 feet lower than before!

One day of rest and then back out to clearing the building site since our first load of lumber is coming tomorrow!  Never a dull moment!

Here's some pics of the damage so you can appreciate the fun. The platform itself held up reasonably well, although there is a decided slant to the floor to the center since we couldn't get far enough under the deck *safely* to jack up and fix the center beam. 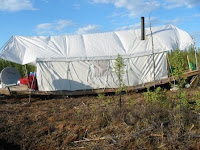 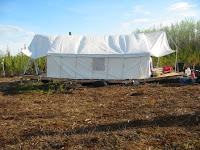 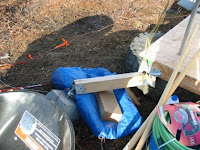 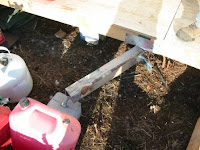 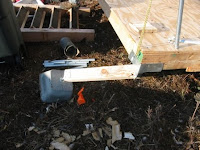 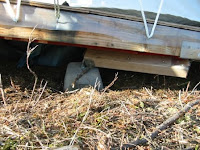 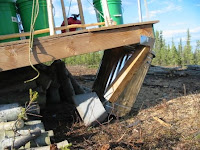 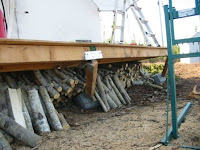 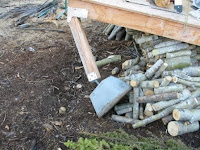 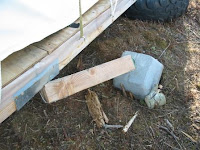 You can see that the force of the collapse actually sheared off some of the metal connectors, bent others and also blew out some of the wooden posts.  Hurray for the metal trash can, that surprisingly suffered only minimal damage, as it took the brunt of the drop load and the lateral load as the deck was in motion. 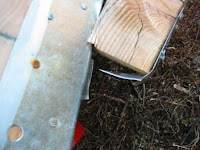 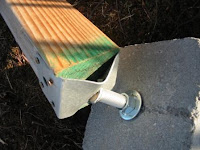 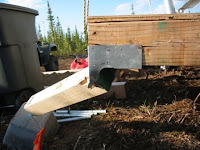 So, what have we learned from this little fiasco?

1. Never alter your design based on the salesperson's word if they don't have the parts you're looking for in stock!

2. Always prepare the proper foundation, even if you know the building is only going to be temporary!

3. It doesn't matter if winter is setting in and you need to get your shelter up quickly, DO NOT build anything on top of an ice lens if you aren't going to move it before Breakup in the Spring!

4. Two exhausted people can accomplish a lot of work as long as they don't say *anything* to each other except the barest minimum to get the job done... anything else will result in arguments and mud flinging (both literally and figuratively).

5. Rubbermaid totes might stand up to getting hit by a car, but they don't stand up too well to an entire  platform dropping on them! 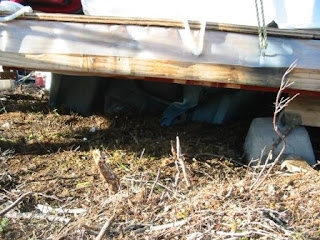 6. And last, but certainly not least, if you're going to have a floating surface foundation then your building can't be 3 feet off the ground. If you want the height, you have to sink the piers. And that means finding a site not on ice or permafrost. Which, luckily, the cabin site has neither of; so we're sinking the concrete piers this time!  Yes, I said CONCRETE piers, nice 10" diameter concrete pillars sunk 4' deep. I'm not trusting my shelter to wimpy wooden posts again unless they are so fat that I couldn't afford them, or they're from whole trees I cut personally from our lot -- there's just too much crap lumber coming out of home improvement warehouses these days!

But HEY - we survived intact and relatively unscathed, so we can laugh about it now :D
Posted by Plickety Cat at 7:28 PM

PC;
Very interesting lesson for all of us.

I see why many old Alaskan cabins stand on multiple 50 gallon drums of rock half buried--ie your garbage can.

There always seem to be many-many discarded 50 gallon drums at the Manley dump--perhaps one should use them filled with rock and gravel as piers--at least a lot of the old timers in bush seem to have done that.

a question--all the piers in many of photos seem to still be way above ground and not buried in mud according to your pics--is the ground under Tent still frozen, down just a little bit? Obviously it is; Most of us in lower 48 don't realize quite this;

I know you keep talking about permafrost yet most of the land all around you thawes out pretty deep by July and Aug if exposed to sunshine; --And I don't believe there is much permantly frozen ground actually around you guys if any; Obviously not many of us are experts in this area.

It's very interesting digging holes around there in summer--very hard clay impermeable soil in many spots except for the assorted old gravel beds;

A very interesting subject that needs explored much further---It's easy for people to just say permafrost--it seems actually much more complicated than that---ie much food for thought.

I know its been pretty warm there lately. ie. almost 70 degree
days for long hours each day. I would say that most people don't realize how nice and warm the weather becomes there at this time of year--until they have actually seen the really long, warm and even hot days of Fairbanks they would never realize how nice it is.

How is the trail/driveway between paved highway just west of you and tent? Many people probably don't realize the Manley/Eureka highway near you is effectively paved. Your access to tent should be getting really bad--in fact I am sort of surprised that you seem to have not got stuck there this spring; --A fellow that was camping there during the summer of 2008 buried one of his trucks to the wheel-wells and it sat like that almost all summer.

Yet, I guess it is much dryer this spring than usual; Any comments please?

I really enjoy following your progress and your updates including these reported set-backs; --This is (potentially) very educational for the rest of us in lower 48;

I wish I was there for the all night sunset/sunrise --it is so pretty with the sky changing for hours and hours;--Enjoy!

PS--Please excuse the long comment--but your site and your activities is much food for thought!

Yes, we definitely need larger piers next time. The 55 gallon drums would work if you had them laying around, but concrete poured into the tubes works great, too. Most of the drums at the dump are rusted or mutilated, so not chancing using any of those :D

All the piers for the tent platform were on the surface, not dug in. It looks like they aren't sinking in the mud, but that's a trick of the eye... the ground is thawed about 12 inches with a tight mat of mossy tundra crap. So the piers are sitting on the mat, but are still sinking into the goo beneath. Under that 12 inches of goo the ground is still frozen rock solid. If we hadn't cleared the trees off, it would remain frozen... i.e. permafrost.

Make no mistake, there is discontinuous permafrost (permanently frozen ground) back here on these lots. We've found plenty, as well as several ice lenses (pockets of frozen water). If you clear the trees and vegetation, most of the thinner permafrost will melt and you can build on it, but only after it stabilizes. Otherwise, best to find a site where there isn't any permafrost or stay on top of the soil.

In most places, there are 6-12 inches of peaty, mossy "soil" and then it's that rock hard frozen glacial silt clay. That is not fun to dig through, but is manageable if you don't mind taking a few days with a pick axe. There are also quite a few gravel bars since there seem to have been a few creeks moved through here at some point... just depends on where you are, it's hit or miss.

Yes, it is pretty warm in the summers. Most folks wouldn't consider 70 or 80 hot, but when you've gotten used to -40 in the winter, trust me, 70 sure feels HOT. And there is no real darkness anymore... we get about 4 hours of dusk between 11pm and 3am this time of year, and then it's bright and sunny again. Well, when it's not raining at least.

Yes, the trail is horrifically muddy and rutted right now. We haven't gotten stuck because we're in a lifted off-road truck with huge mud tires... any "normal" vehicle would have been stuck weeks ago. It is a little drier this year than previous since we didn't get as much snow, but that also means that there is more soil melt beneath which makes things nasty. Some areas are nice and dry (suspect over a gravel bar) but others are boggy and soupy and just suck at the tires. Even we travel on it as little as possible... but have a big ol' winch mounted on her to get ourselves out of the mud just in case!

I believe simple 45 Deg cross-bracing would have been the single most effective thing that probably would have avoided the problem, but my comment is not meant to be negative. I like all have learned many things from experience.

Glad you are ok; it is always something, eh?

Wow that totally sucks!
oh and your old house finally went up for sale.

If it is not one thing it is the other, way of the bush lifestyle!!
Glad no one or 4-legged 'kids' were injured.
It seems to be #4 of the observations would help us greatly in getting projects closer to the completed stage.