We now have a foundation, one floor, and two walls!  Yippee :)

Day 41 - things went a little slow since we were sort of figuring out how to make my design model come to life when we had to deal with nasty things like gravity, imperfect lumber and dozens of bent nails. There is no CTRL-Z Undo in the real world -- dammit! 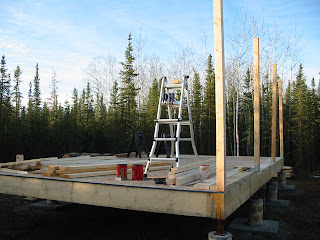 But we got the first 4 posts up on the east wall. 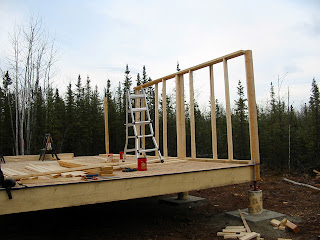 Day 42 - realized that executive last minute design change the day before to leave the posts at 8' was ill-advised and had long reaching ramifications. Well, technically they were "short reaching" ramifications since it would have meant that our stairs wouldn't have reached the second floor unless we completely redesigned the staircase and let them take up too much floor space.  So we lopped all the tops off a foot with the chainsaw and finished all the infills for the east wall. The door buck was a particular pain in the butt... I have a sneaking suspicion that we'll be doing some moderating planing of something to get the pre-hung door to fit in this rough opening. 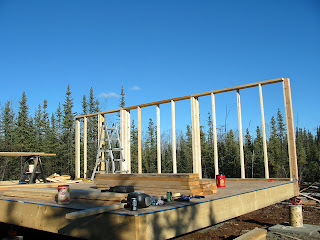 Day 43 - getting the hang of this building stuff now, but it was errand day so we were down in Manley and also helped a friend fix his computer and network (again! the man has gremlins). No work on the cabin since it was getting late by the time we got back. But we did split some firewood... well the G-man did since Ripley decided it would be fun to pile dirve herself head first right into my bad hand and set it off again. Arg!

Day 44 - rocking along pretty good now, even with my gimpy hand. Hauled a bunch of lumber down to the site. Then we got the 4 posts up for the west wall, and one section of the infill started, plus all the pieces to assemble the rest of the west wall cut and laid out. 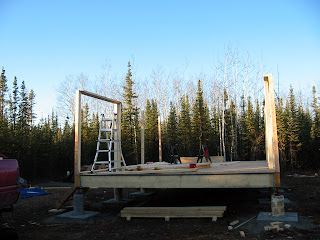 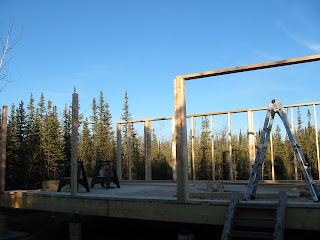 Day 45- FIRST  SNOW!!!!  But we managed to get the rest of the west wall completed before it started falling too heavy and I started to get too cold. 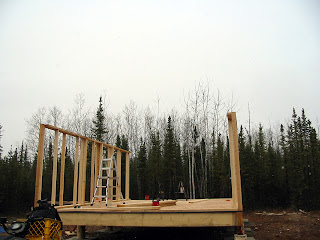 Don't worry about it tilting in at the top... the walls aren't plumbed on the E-W axis yet, not until we either get the end walls framed in or the header beams on and the loft joists in. 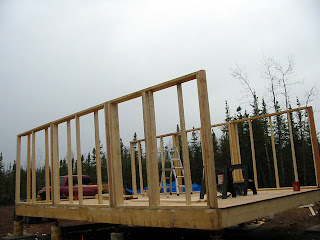 But the studs and posts are plumbed on the N-S axis... or at least as best as we could make them considering most of the studs were completely folded, spindled and manipulated LOL. We can drive a nail where we need to in order to attach the sheet goods... that's all that counts :D 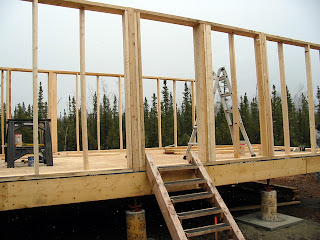 And, bush recycling at it's finest... these are the kick-away utility stairs I originally assembled for our tent platform before we had our little private earthquake. The fit perfectly in the front door rough opening (which should fit much better than the back door since we learn from our mistakes!).  Convenient, no?! 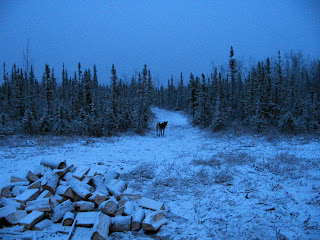 Yup, those weren't just flurries. It's still coming down and it's sticking. Poor Ripley thinks anytime we come out the back door/flap we're going down to the cabin site... she doesn't realize we can't see as well in the dark as she does, and we don't have a big fluffy fur coat to go play in the snow. Silly pooch!

Tomorrow - it's building up the two header beams. Maybe, just maybe, pre-cutting the pieces for the infills on the north and south end walls... we'll see what the weather allows.
Posted by Plickety Cat at 10:34 PM

Your moving right along.

What an amazing luxury that cabin is going to feel like for you two! Impressive work!

Thanks for the pictures, PC.

I found your blog about 4 days ago, and was so impressed with the whole move...I went back to the beginning and read the whole thing! I've finally caught up, and I can only say that I am so glad you are letting us share this adventure with you!

Thank you so much for sharing!

So we lopped all the tops off a foot with the chainsaw...

Fine-tuning your plan with a chainsaw, that's a woman after my own heart. Months and months of planning and thinking, then coax the project into compliance with a chainsaw (one of my favorite faming tools). As you get higher, with the snow...be careful.

It's coming along, I hope you guys can get a roof on it and maybe move in before it gets really cold.

best wishes on your cabin building.
May the weather be in your favor.

Looks like you're making great progress. I love looking at the pictures. I hope your staying warm & dry.