So back to normal service and less of the ranting and a quick update to all of our regulars.

Over the past couple of weeks we've been relatively busy. Tom's visit was good, although we achieved a little less than we'd hoped for, but that's the bush for you.

We did get into Fairbanks last week and picked up our kitchen cabinets... W00t! we just need the internal wall to put them up against. We also dragged our western neighbors 16' camper behind us on the way home, which was completely special. We lost the right rearview mirror back in the fall, and we've been waiting for a replacement (which wasn't there when we were in Fairbanks unfortunately). So we had kitchen cabinets in the bed of the truck, so no regular rear view, and the left which was fine when we only had the cabinets. Then the trailer, and the rearview was completely useless. Fortunately very little was moving that day on the Elliott we only passed a couple of semi's coming in the opposite direction, and had nothing behind (I think anyway) or in front of us from Fox to Livengood.

Well that was the easy part, then we had to haul it down our raggedy ass trail, where it lost one storage hatch, the air conditioning trim, and the step, which wasn't that bad considering. Then we pulled up, and I tried to side swipe our storage shed (hey I couldn't see jack out the right side). We got re-combobulated and pulled up. Only to have the truck die. The battery has seen much action with our winch, and it's feeling a little tired, well given I left the lights on for about 30 minutes while we unhooked the trailer, and we had some broken electrical wire (another casualty of the trail) sitting in a puddle, I suspect the battery was in severe need of a nap. It was, and we charged it overnight, and it ran like a champ again. We have a new replacement that's going in tomorrow.

So the trail is holding up at the moment barely, the mud under the surface is still frozen, but in a few days or so it's going to melt, and then it'll be next stop South Africa (or somewhere in the southern hemisphere, that's about our lat/long but south and east). So I suspect we'll be leaving our truck at our old standby place the next time we take her out to the road, and using 4 wheeler to bring things back.

Anyway part of the reason for bringing out that camper was that our western neighbors Rose and Greg (who I hope don't mind me stating their names) were coming down to work on their property, they're expecting to move down here Memorial Day weekend. So we should have some nearer neighbors.

So they arrived on Friday evening, so being neighborly, I dragged their trailer (an 8' single axle) down to their camper, or at least tried to... Here's the result... 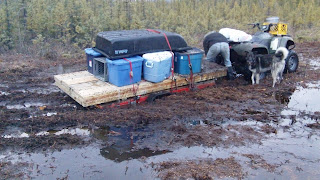 Oopsie... Yes it's resting on the rails. Their Camper is parked about 20 yards from our place in our clearing (since it's clear... that's why it's a clearing) while they're working on their own clearing, luckily the sinkage was only on the other side of our shed, so a brisk 15 yard wade. Also note the return of Lake Wardle, however this year it seems to be draining a little better than last year. Please observe that Ripley is giving us her best "Blue Steel" look, (or was that "Le Tigre") with crooked front paw. She's such a ham. It took about 15 minutes in the morning (this was taken at about 11pm) to get it out of the bog, with many thanks to Hi-Lift such a simple design, with a myriad of applications.
Posted by Gungnir at 9:13 PM